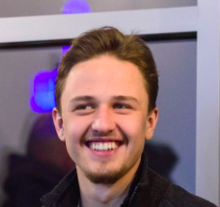 February 28, 2019, «Urban Curators» and «Understand Soviet Podil» conducted a discussion on the meaning of the role of industrial architecture in the modern city on the example of the Kyiv Podil and its industrial zone. The event took place in the KARZ-12 space. This is a summary of the discussion between Anastasiia Ponomarova, Oleksandr Anisimov, Natalia Mysak and Anna Dobrova moderated by Ivan Verbytskyi.

The brief summary of the discussion in Ukrainian is available by the following link. 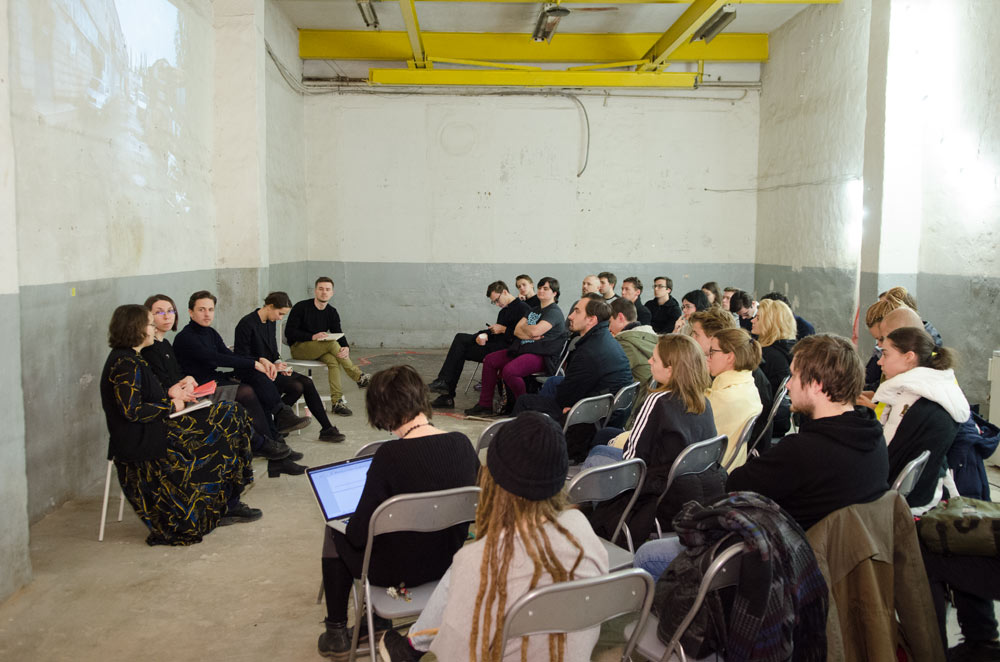 It has been almost four years since I started to work on informal city transformations and research about post-industrial areas. This topic in Ukraine is not widely popular but already is a topic of discussions and thinking, where local and international communities demand must be assessed. I am a co-initiator of an independent study of Massachusetts Institute of Technology titled «Post Industrial Podil. Ukraine in transformation». We are to present the results in the nearest future.

There are a couple of scenarios within this studio that we propose for the development of the former industrial areas in Kyiv. First is an action against uncontrolled gentrification. Second — to rethink the Soviet legacy. The last is to develop alternative scenarios in line with emerging approaches of urban design in Ukraine.

KARZ-12 is the territory where Kyiv automobile repairing factory used to be. Today it was accidentally transformed into office spaces such as photo studios, fitness centre, art galleries and small production spaces and warehouses. On the contrary, one pavilion is occupied by a coalition of urban agencies and bureaus, which come up with the idea to settle there on the purpose. This territory is the beginning of the huge industrial zone in Kyiv spreading up to the north. Some fact about the zone. Kyrylivska street is the oldest industrial street in Kyiv with plants from the end of the 19th century, which are valuable enough to be kept for the future. Fortunately, some of the ruins are temporarily transformed into offices but there is no strategy and tools for the integration of these processes into urban planning.

Within Urban Curators research in Konstyantinivka (the Ukrainian city 30 km away from the war zone on in Ukraine) we discovered a huge industrial zone in the city centre that used to be a location for 20 factories. People have different opinions about this zone. Youth are fascinated by the present time, they see themselves as stalkers and roofers and enjoy ruins. Oppose to them, the older generation has nostalgia about the past, for them the past is more about valuable time spent working. Architects and developers see former industrial areas in the future with new functions and new forms, where usually there is no room for the past. Our goal is to find a common ground between all these groups. 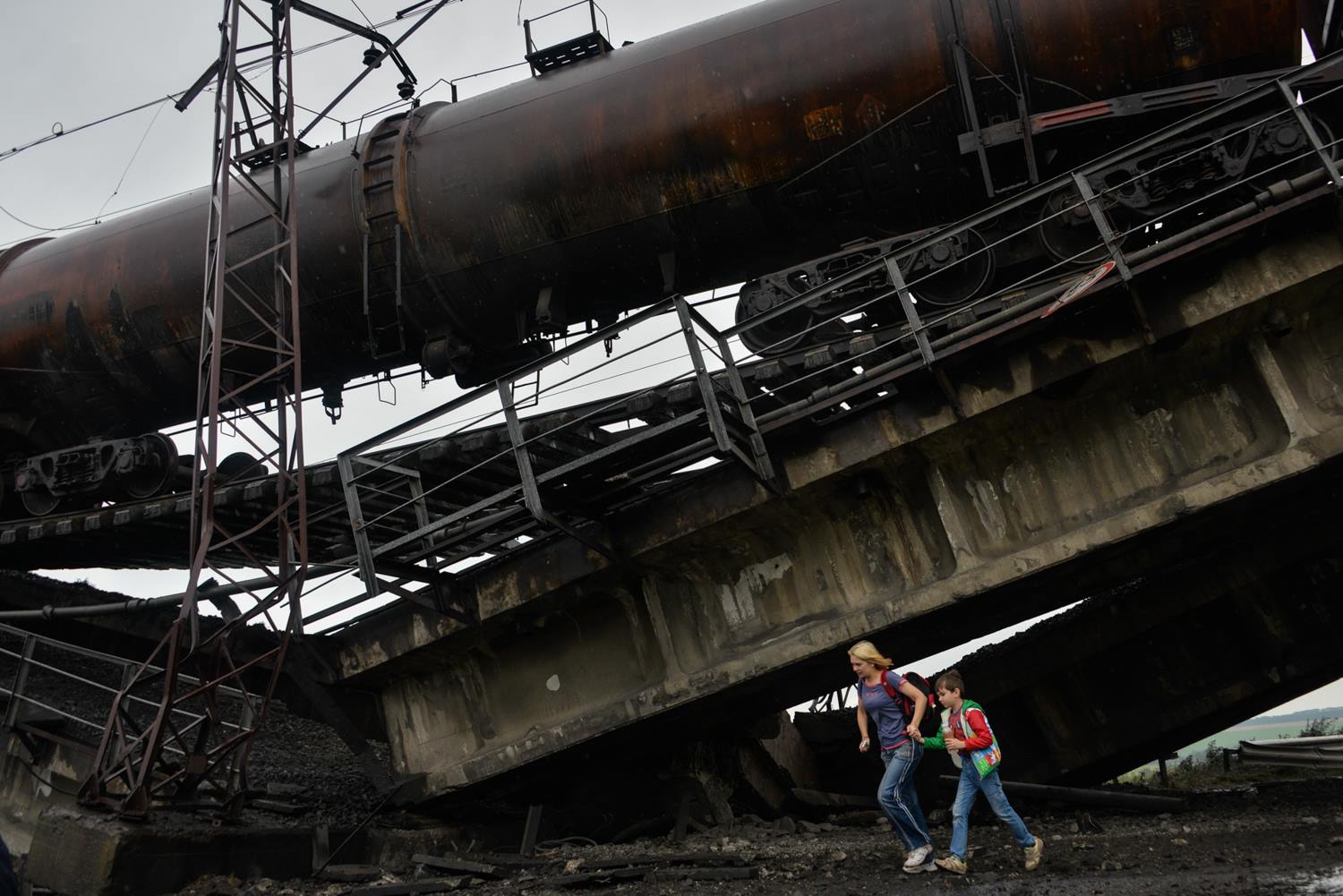 The built environment of Podil is Soviet for 50%, while public spaces are by 80-90%. Although the urban fabric of Podil was developed mostly according to the pre-revolutionary master plan of Gester and Melensky in 1810, the legacy of Soviet architects is no less valuable. The idea of the project «Understand Soviet Podil» is to think and to look at socialist built environment differently. Also to promote collective reflection on what to do with this legacy today.

While the General Plan—2020 does not imply fundamental changes, the General Plan—2025 intends to rebuild industrial Podil with housing and civic functions. In fact, these industrial zones are not one entity. Thus, they could not be transformed by homogenous logic. Some of the former industrial areas are far from city infrastructure and existing housing stock, some of the areas still have production functions, others have high architectural quality. We need a wide range of approaches for their transformation. We could not copy the urban fabric of old blocks of Podil to a former industrial zone. Currently, there is no debate about alternative scenarios.

From the very beginning, gentrification is an issue of an absent knowledge, of the absence of research. There is no clue who has an interest in balanced development. If the community has no information, it is not able to vie for any decision. There is «Great silence» between the stage of concept and the point where one «cuts the ribbon». The phase of opening presents a new world for users and the community. Usually, there is an argument for not asking citizens, based on the idea that citizens do not have their opinions, as they remain silent about construction and etc.

According to the prior sociological study, which I am conducting with my colleagues, there is a utilitarian attitude to the legacy from 1960-80ies. First of all, to them Soviet architecture is about apartments, but not about architecture or art. Architecture plays no role if it comes from later then early 20 century. It's something different. Even though it has windows, doors, it cannot be considered in terms of beautiful, good, right or our. This is something which is not defined yet. Apparently, it is impossible to revitalize a space if one feels nothing about and does not see its value. In these conditions, there is a huge risk for architecture. Housing stock has a social value per se. Oppose to it, if industrial legacy loses its initial function and there is no demand for a new production, solely architecture quality could remain. And today, we are left with the only option to evaluate this legacy by the aesthetic and spatial criteria only.

Soviet Podil was developed by industrial enterprises, which played the role of developers. We could look at the result of Soviet industrialization as at something which is not OK but we simply could not ignore its intellectual value of the comprehensive approach to thinking about the city. Try to accept the fact that Soviets were able to create enough infrastructure for the city to run in 2019 keeping in mind that almost nothing was added to it during the time of Independence. Cinemas, cultural palaces, swimming pools, markets, kindergartens — they are all from the Soviet era. Soviet urban planning approach relied on the social idea and logic but had badly coped with its own mistakes and for sure could not be appreciated by people at that time. 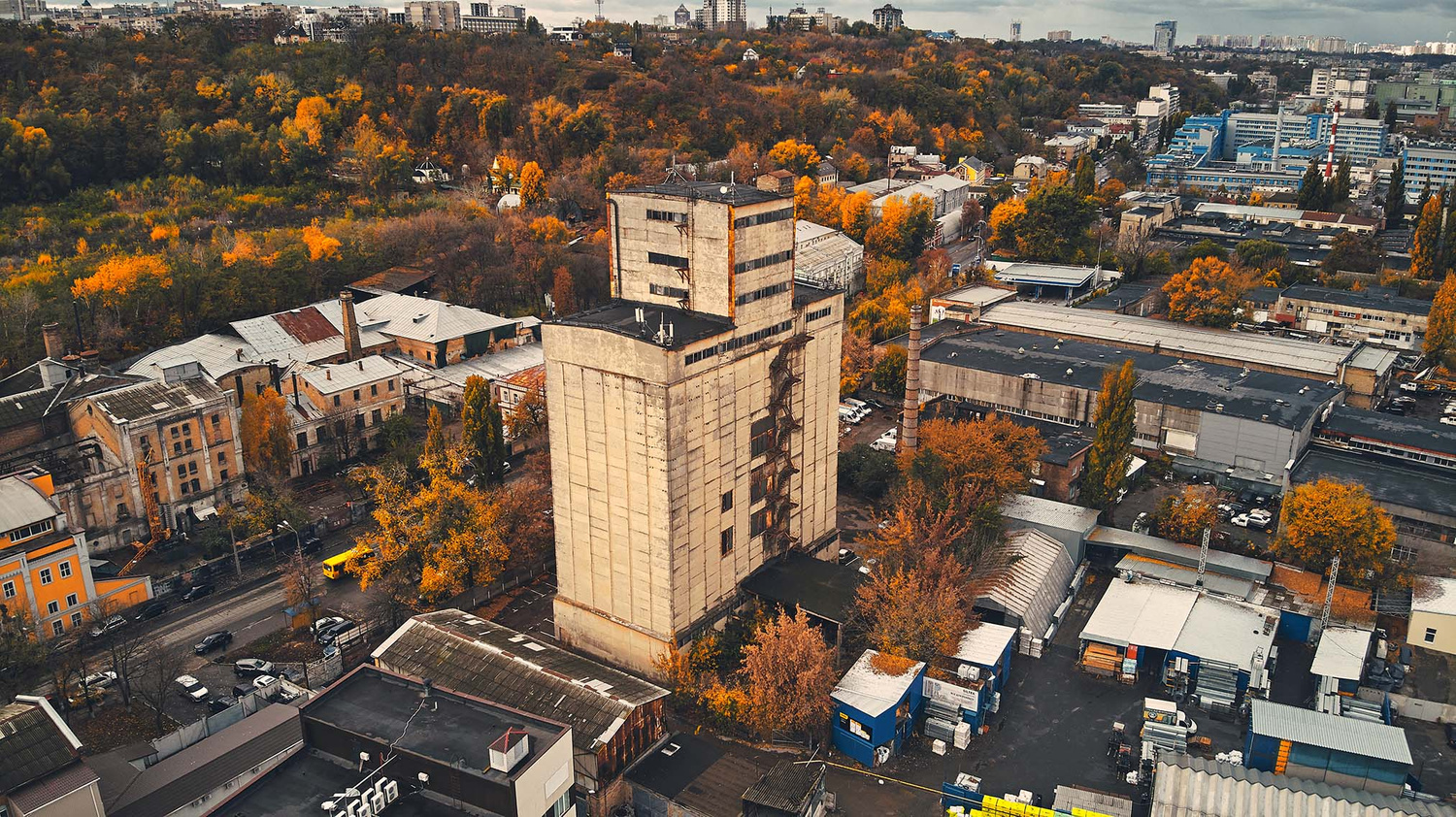 Natalia Mysak, researcher at Centre of urban history in Lviv

When talking about Soviet industrial heritage of Lviv we may follow one of two approaches: to see it as a housing district built specifically for workers of industrial plants or as a city landscape, created via industrial means, from prefabricated slabs and plans.

In the research of Sykhiv district, I tried to interpret it as social space, urban form and by the means of representation. Such spaces require the use of instrument from a range of disciplines. As for example, in 2017 in the Centre of urban history, we hosted interdisciplinarily summer school «Sykhiv: spaces, memories, practices». It consisted form three studios where we focused on architectural, anthropological and historical methods.

I would recommend leaving aside the classical definition of architecture. Housing was planned based on the social and economic calculation, primary with an idea to solve the housing crisis. There is a great possibility that cultural element of socialist housing districts is created in the process of use and often comes as an immaterial value. We could refer to Kuba Snopek book «Belyaevo forever» — which tells us about a possibility to conceive sleeping district as heritage, because of prominent avant-garde artists who lived and were active in it in Soviet time.

Modernism is contrasted to the idea of Heritage, as that was the period when a lot of historic buildings were demolished to give way for new construction. The idea of conservation in architecture was a backlash against this approach. We are still in need of new approaches on how to think about modernistic microrayon as a heritage, both social and intellectual.

Transformations of housing districts and industrial areas have something in common: in both cases, we observe the fragmentation of ownership which сomplicates structural redevelopments and transformations. But what distinguishes them is that housing has its specific group of users who live there. On the contrary, postindustrial territories are often inaccessible and therefore absent on the mental maps of city dwellers. Processes which for any reason happen there do not have the connection nor to the territories around neither to the whole district, they are places «inbetween».

When the city does not have instruments to influence the processes of post-industrial transformations, it may seek an option of balancing private and public sectors. The risk of gentrification lies primarily in that it pushes out the most unprotected groups, who often do not have a voice in the decision-making. That is why it is incredibly important to find options on how to compensate such transformations.

If to recall R. Sennett`s, a city has to be unfinished, incomplete to be able to live and evolve further. Post-industrial territories in Ukrainian cities are such potential if only they are not developed solely as housing districts. As well, if we are to consider post-industrial heritage at the level of the city image or as a competitive advantage, the importance of industry becomes clear. It covers no less than 30% of the city and is an important part of its identity. Even so, we should keep in mind immaterial heritage of industry as well. 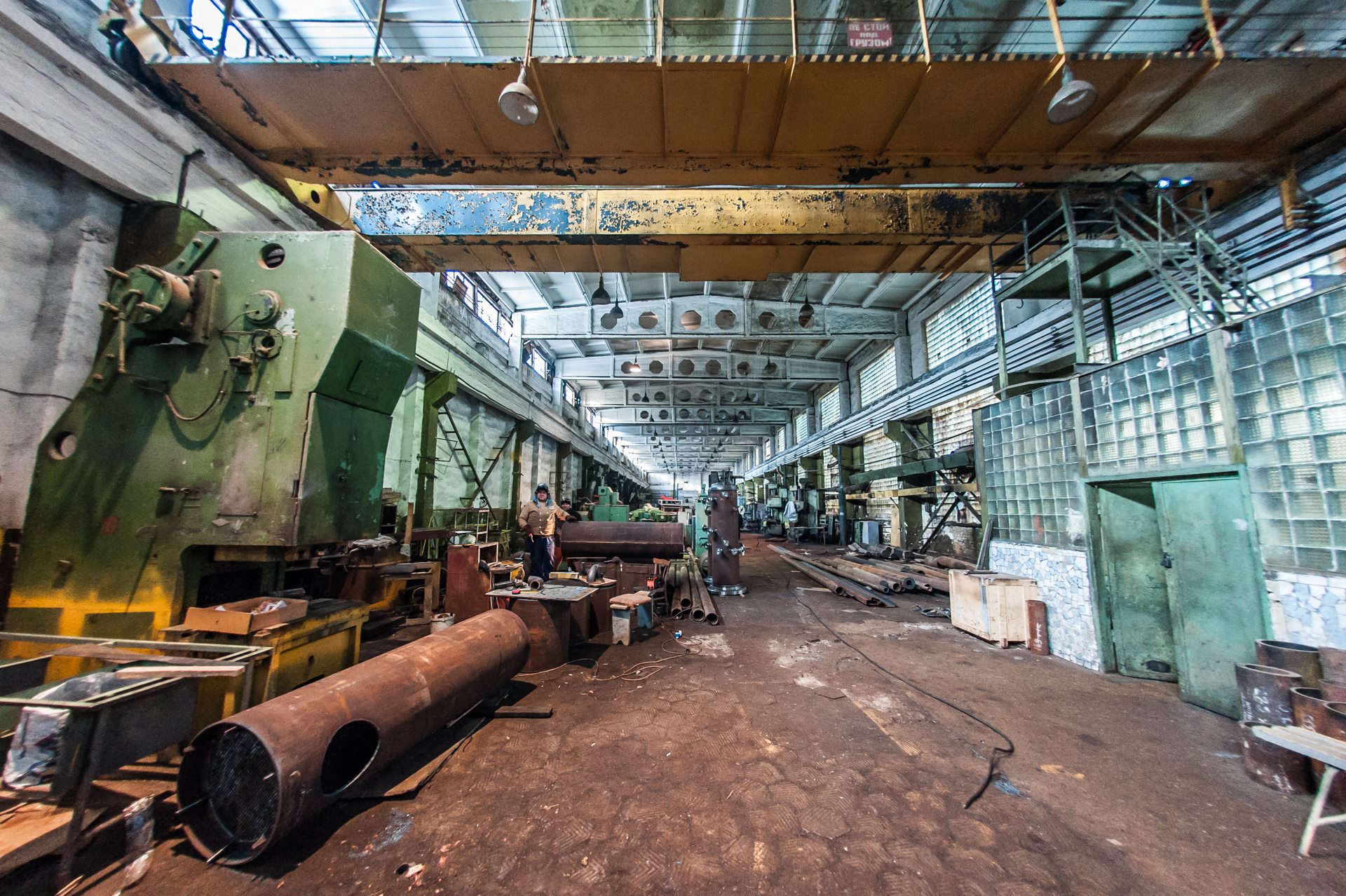 Anna Dobrova, curator of MetaLab at Promprylad factory in Ivano-Frankivsk

Promprylad is a self- revitalization case. The whole process started with the CANactions research, which identified industrial territory as an asset in the city. They were first to think of how to save structures from demolition. NGO Teple Misto (Warm City) saw it a challenge to think about how to create an innovative creative centre in Ukraine. This process is based on continuous research and no one really know how it will end. A lot of investors will buy out parts of the plant, not in the classical way of one investor who gets the whole plot.

We look attentively at what how things are developing now. We identify risks and opportunities, create a holistic vision of how the project influences the area around. It is important that general discourse has changed from pushing production out of this place to discussions about models how it can be retrofitted. We are deeply involved in the formulation of scenarios of its future.

First of all, it is necessary to find a group of users who create social demand for a place to be. This is an argument for a revitalization of a specific site. When public space is created, it often helps to form new communities, such as Closer./ However, such a scenario of bringing new functions can become very attractive for an owner who could use it to redevelop the site into offices or housing. 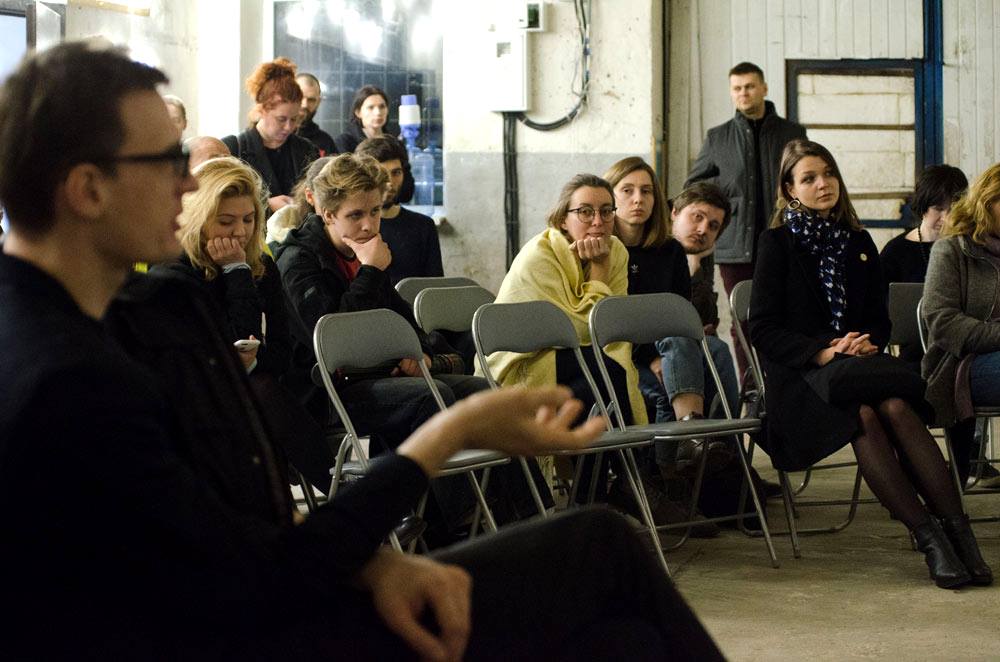 Promprylad is also an idea of conserving ecosystem, even with the use of some artificial methods. Artists, craftsmen, and musicians who rented studios there, went out. These spaces are now occupied by more profitable organizations. This is how inner gentrification looks like.

We need to pay more attention to the context as postindustrial transformation is always a specific case. Our romantic idea is to preserve the Soviet plant structure and to bring new life inside. Continuation of production is possible. We can slowly lessen the space it uses and keeps the transformation process slow. This is needed for new managerial and spatial changes to take roots and give people options to join a new community and have new jobs in FabLabs, workshops etc.

In general, people are afraid of change. They react negatively to transformations and development nearby. As a rule, there is no time for a collaborative and more conscious process of discussion with the community. I have an assumption that here we still do not have a culture of reuse. But industrial sites often have everything to be reused, even counting on the technical and environmental aspects.